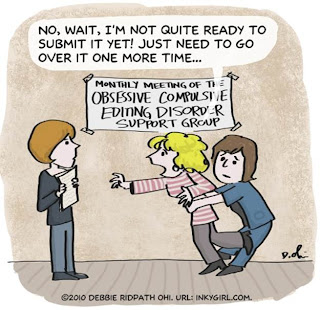 Yeah … you’d think, now that your novel is in the final stages before publication and the hard part is done, right? You’ve worked hard. The novel is written. The edits are complete. The cover design is in the works and the copyright is in process. Marketing is ramping up, the release party is scheduled, and your last rejection is behind you.

Now the book is all it can be! All that’s left to do is to make a list of guests, whip out a new blog post, update Facebook LinkedIn and Twitter, and maybe, since you’ve been inviting so many people to your website (mine’s www.dbcorey.com, by the way), you decide to have a quick look at the excerpt you put there to make the reader’s mouths water. After all, it’s been a while, and you just love that scene.
You read out loud because you have a reading coming up and you need the practice, but mostly because the words are so pleasing to the ear. You smile as the words flow without effort from your lips; you hear the music, the rhythm—the tongue-twister….

OH NOOOOO!!!! NO! NO! NO!
IS IT LIKE THAT IN THE MANUSCRIPT?
OMG! Whereisitwhereisit? Scroll-scroll-scroll. Crap! Find! Ah! There it is.
OH NOOOOO!!!!
It’s the same!
WhatamIgonnado? WhatamIgonnado?
FIX IT! That’s what!
But the publisher has the copy that says Approved Final Copy. If you change it, then it won’t be the approved final copy anymore. So you bite the bullet and send them the NEW Approved Final Copy—Ver2! Then you hope LegalZoom hasn’t sent it to the Copyright Office yet or it’s gonna cost you more money and you call them and tell them to trash the one you sent yesterday and use this NEW Ver2!

It’s been a taxing experience, so after all the corrections and calls and emails, you’re worn out, and you go to bed.
The next day everyone is amiable and understands that this is a process, and that’s just the way it works.
You feel good. You re-load the newly, un-tongue-twisted version onto your excerpt page and resume your out-loud reading.

“Dump them in the sink,” he commanded Vecchio, shoving the baby into Vicky’s arms. “Hold her! Open her mouth!”
Grabbing several capsules from the basin, Truax broke them open. Seeing Vicki struggling to get Jade’s mouth—

Illustration used with permission from Debbie Ridpath Ohi at Inkygirl.com

Short and sweet. A little marketing, if you please.

MBA&M did an interview with me about Chain of Evidence. If you have a few minutes, give it a look. Maybe a "Like" or two as well. A "Follow" couldn't hurt either.
Thanks.

Posted by Unknown at 5:18 PM No comments: 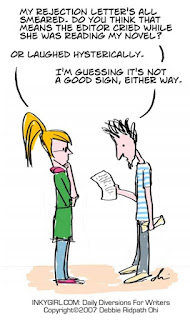 I’ve attended writer’s conferences before. Maryland Writer’s Association, Bay to Ocean Writer’s Conference ... a couple others whose names escape me at the moment. I found them enjoyable, even if I did feel like a fish out of water.
I had been writing for maybe a year-and-a-half, had finished what I call today my practice novel (it wasn’t very good), and began my quest for publication. I heard that conferences were the way to go to get a feel for the industry. I could meet publishers and editors, attend Q&As with authors manning a variety of panels and roundtables, and the pièce de résistance, if you will, schedule a sit-down with an agent; a fifteen-minute, one-on-one shot to deliver your pitch to one of publishing’s gatekeepers. But that kind of undivided attention costs extra. And it should. Time is money, as they say, and your fifty-or-so-bucks buys you that time.
But, I decided I wouldn’t spend the money. “Fifty bucks buys a lot of U.S. stamps,” I said to myself. “I can reach a lot of agents for fifty bucks. Why should I spend it on just one?”
Looking back at the experience now, I realize that I was the person folks refer to as the guy who just fell off the proverbial turnip truck. Soliciting an agent takes months and months of customized query crafting, synopsis sculpting (at different page lengths), cover-letter cobbling, label printing, stamp sticking, and envelope licking—all to be able to finally sit back and collect the rejections. Additionally, some agents won’t accept queries if they didn’t meet you at a conference somewhere, so in light of that, fifty bucks seemed like a bargain.
So I spent the dough; talked to an agent from one of the BIG New York agencies, delivered a flawless pitch, and sat back to listen to what he had to say. The feedback was immediate. I had more work to do.
Was I disappointed? Of course. Did I learn something? Yup! Would I do it again? In a heartbeat. And I did. Why? Because what I didn’t have to do, was wait months on end for responses that contained zero advice, and that’s if they responded at all.
And what does this have to do with the C3 Conference you ask? Well there will be agents, editors, publishers, and authors like most writers’ conferences, but the C3 isn’t just a writer’s conference. It’s a fan conference, and speaking as a newly minted author whose book will be released in August, I’m just dying to meet (and make) some fans. Just a couple will do, and family doesn’t count. Plus I am anxious to meet Jeffery Deaver, Trice Hickman, and John Gilstrap ... just to name a few; accomplished authors who I hope will bestow upon me the benefit of their invaluable experience while allowing me a glimpse at the big-time—and I think that’s pretty cool.
If you are a writer, and want to publish (and what writer doesn’t?), I think you will find C3 a better fit than going the traditional route. The old established way is hard. Very hard! Even today’s most well known names were rejected uncounted times. Independent publishers like Intrigue and Acorn are coming into their own, and represent a new direction in the publishing industry. They are in the hunt for writers who are good, but have experienced rejection after rejection like me. They will give you a chance, simply because they are new, they are hungry, and they are looking for the next Stephen King or James Patterson or Isaac Asimov. The publishing industry is changing because technology has allowed it, and anyone who ever dreamed of seeing their novel on a bookstore’s New Releases shelf will benefit.
I think you will be very excited about what you find here. Take advantage of this conference while you can. There aren’t many like it, and you don’t want to be standing on the platform when the train leaves the station.
As someone very special to me said when I was about to quit, “You’ve worked so hard and learned so much, why would you give up now?”
Good advice. I’m glad I took it.
DB Corey
Illustration used with permission from Debbie Ridpath Ohi at Inkygirl.com
Posted by Unknown at 3:45 PM No comments: