Ever wonder about Inspiration? What it is? Where it comes from? Why it hits you the way it does? For some, when Inspiration strikes, they liken it to a bolt of lightning.

I’ve been somewhat remiss of late, tending to my blog. Any scribe will tell you that there is more to the art of writing than placing words onto a flat medium, one after another in sensible fashion, to hold the reader’s attention and perhaps entertain them to some degree. In a word, if one is to write, one needs a bit of inspiration. I’ve been lacking that single ingredient the past few months and I cannot tell you why. Inspiration comes and goes, and like Time, it waits for no Man. So when it struck last Thursday night, I couldn’t wait to get to my computer.

I have the good fortune to be married to an incredible woman who occasionally has access to social events that most folks only dream of attending: seats at Oriole games just five rows behind the dugout, sky boxes at Ravens games, and a charity event where I donated under my pen name. But those pale in comparison to the event to which I escorted her this Thursday past.

Maggie works for The Space Telescope Science Institute as the Executive Assistant to the Director.
Never heard of it?

Ever heard of the Hubble Space Telescope?

Last Thursday was the 25th Anniversary of Hubble’s launch, and the celebration was grand indeed. The day-long event included Key-notes and panel discussions by scientists, high-level administrators, and astronauts—that’s right, astronauts—and afterwards, opened to the public for autographs for a short while. Families of STScI employees came with their kids and some dressed them in little flight suits. Photographers documented the goings on, and STScI staff directed visitors and guests here and there.

Then, cocktail hour was upon us. 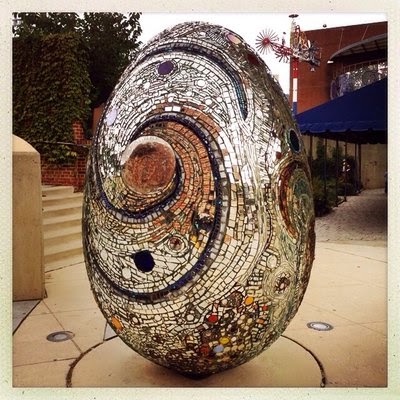 The VIPs and guests +1 piled into busses and the drivers navigated their way to The American Visionary Art Museum through the downtown Baltimore rush-hour, which managed to turn the cocktail hour, into the cocktail twenty minutes. But that was fine. We punched out a little conversation and a couple drinks with friends and then shuffled up to dinner.

Now Maggie knows all about my Naval Air background and flying aircrew aboard P-3 Orions searching for Russian subs, and she knows I’m a techno-geek and like things with bells and whistles and flashy lights, and she knows how I enjoy science and Sci-Fi movies, and how I dream of getting into Space … just once … before I die.

Knowing all these things about her geek-a-zoid husband, she sometimes comes home with cool stuff: The Mission Patch from Hubble’s last service mission, STS-125, for example, mounted on a commemorative plaque, given to her by her then boss, Dr. John Grunsfeld; Physicist and Mission & EVA Specialist aboard five (count 'em, five) Shuttle missions. This is the guy who walked in space eight times to repair the Hubble, and the one man I really wanted to meet that evening, but sadly, did not. His resume is stellar, and far too lengthy to be listed here.


She also brought home (for me), an autographed copy of the iconic scene from Top Gun, where Navy F-14 Tomcat pilot, Scott Altman, sends a friendly "Hello" to his counterpart in the Russian Mig-28.
(You didn't really think it was Tom Cruise at the controls of a U.S. air superiority fighter, did you?)


If you saw the movie, I’m sure you’ll recognize the scene. 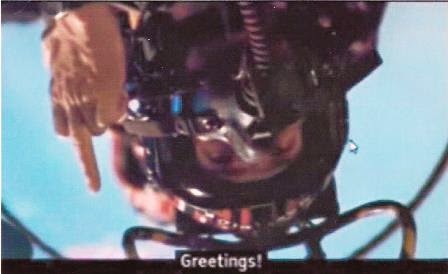 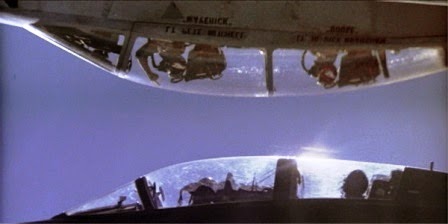 So you’ll understand my complete and utter giddiness when, while seated at the table beside Maggie, she says to me, “Turn around. That’s Scott Altman behind you.” 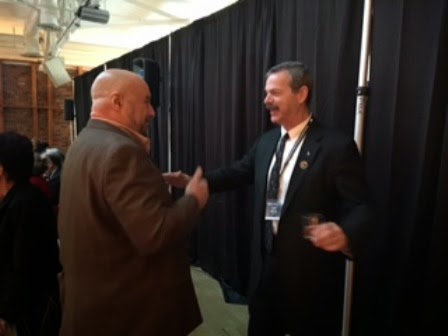 Being able to introduce me to a living breathing astronaut was something she just couldn’t pass up, but I didn’t even give her the chance. The man flew in space four times. FOUR! TIMES! And commanded the shuttle twice. And you think Sheldon Cooper of The Big Bang Theory is in awe of these guys? Can’t hold a candle to me. I was out of my chair in less time than it takes the Atomic Clock to tick off a millisecond.

I did manage to keep my totally star-struck excitement in check. I introduced myself and began talking about Navy stuff, something sailors love to do. We chatted for just a few minutes before the Emcee asked everyone to take their seats, but before he returned to his table, he graciously agreed to a selfie, which I will shamelessly place on display here, but as you can see, Maggie is never happy about pictures she's in, no matter whom they’re with.


I think it goes without saying that this rates among the top five coolest experiences of my life.
I never dreamed of being a writer. I dreamed of being an astronaut, but my path took me elsewhere, and flying as enlisted crew aboard the P-3 was as close as I got, so when Maggie says I have a man-crush, I harbor no shame in admitting that it’s true. I met Scott Altman, a man who commanded the Shuttle in outer space. Outer Space. Jesus, the words themselves resonate and seem surreal to me. The danger involved in space flight is enough to garner enormous respect for these men and women, as evidenced by those who came before and gave all: The flight crews of Apollo 1, Challenger, and Columbia. Yet, in spite of the hazards, or perhaps because of them, they continue to reach for the heavens.

That night I stood at the crossroads where Science Fiction meets Science Fact. It was a departure from the fantasy of literary characters such as Buck Rogers, Flash Gordon and Captain Kirk, to the flesh & blood reality of  men & women like Shepard and Armstrong and Lovell and Ride, and now Altman and Grunsfeld and many, many, others; pioneers who put their lives on the line, not to journey westward on wind-powered wooden sailing ships as did Columbus, but skyward, riding machines of steel on tongues of flame toward the unknowns of space. They do so not for glory or wealth, but for the chance to realize a dream, and perhaps in the process, do something few have ever done—something truly great.

How can you not admire them?


Sometimes still, as old as I am, I look to the heavens on a clear October night with the wide-eyed wonder of a child. I stare at the stars and drink in the constellations, and as I search the blackness to locate the Little Dipper, or Venus or Mars, I contemplate the infinite nature of the universe, and in doing so, find myself in awe at the utter and absolute insignificance of our planet and the human race.

Carl Sagan said, "The total number of stars in the Universe is larger than all the grains of sand on all the beaches of the planet Earth." Looking up at the night sky, I think we are so much smaller.

An important side note:

Watching the video’s in the links below, we can see that Hubble provides not just the most comprehensive look deep into our celestial home, a frontier we know little or nothing about, but along with Kepler, provides the only look.

What happens to Hubble, and our window to the Universe, when the money runs out?

Hubble’s staunchest congressional supporter, Senator Barbara Mikulski, will retire next year. When she does, who will pick up the baton? The Obama administration has seen fit to mothball our shuttle fleet and put our orbiters into museums, thereby reducing the greatest space-faring nation on Earth to begging rides from the Russians. While the Chinese and Russian Space Programs move forward, ours stagnates in irrelevancy, and until we elect a Kennedy-minded President with the foresight to recognize the scientific and sociological benefits of a Manned Space Program, we must continue to explore the universe any way we can. Fortunately, Hubble has provided a means to do that, but it is nearing the end of its life cycle. 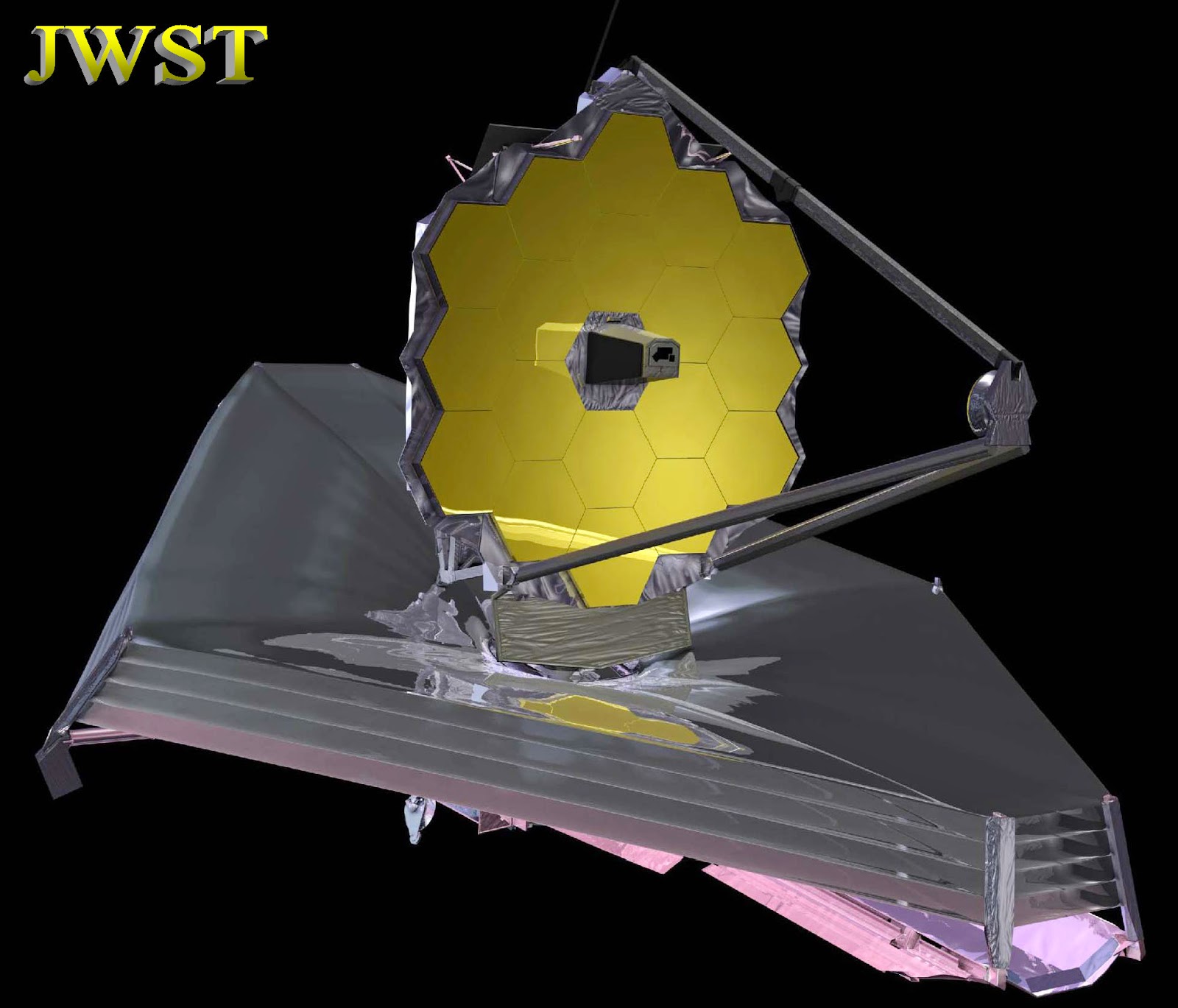 It will undoubtedly need congressional funding.
PLEASE!
Request your Congressman/Congresswoman to vote for funding. Congress votes to piss dollars away on a planetary scale for all manner of crap and foreign aid, so let us keep some of the AMERICAN TAX MONEY—your money— at home! Tell Congress to slice out a few billion for James Webb.

Follow these links, and see what our space telescopes can do.
Hubble:
https://www.youtube.com/watch?v=ki6kQT7YPQY
http://hubblesite.org/gallery/movie_theater/

Posted by Unknown at 2:01 PM No comments: