Stetsons and Stilettos, Pantomimes and Phrases

Your novel is available on internet sites, and maybe a real bookstore or two. It’s picking up a little momentum, your Facebook page rocks, and your reviews are 4s & 5s across the board. You are pushing your brand, and life is good. But what do you, as a writer, use to set yourself apart, other than your writing? Is there something about you, outside of your novel, that makes people take note? Makes folks recognize you on the street?

Several of us who have books published with Intrigue Publishing hooked up a week or so ago to discuss stealing (he-he) “borrowing,” an idea our femme fatale counterparts came up with. They, the gals, thought it would be a good idea to join forces to do a little marketing, so they formed the Book Divas on Tour; their mission—to promote their work as a group. They felt they’d have a broader appeal if they offered a little something extra. They came up with the tour idea. Four writers for the price of one. More bang-for-the-buck, as they say. So we, the guys, formed Meet Myster Write.

The idea is to tour and make ourselves available to book clubs, bookstores, coffee shops, libraries … anywhere readers gather to talk about reading, writing, the writing process, publishing; anything. We think it might catch on. We’re not billing it as books for sale, although we might just keep a few copies in the trunk of the car, just in case. 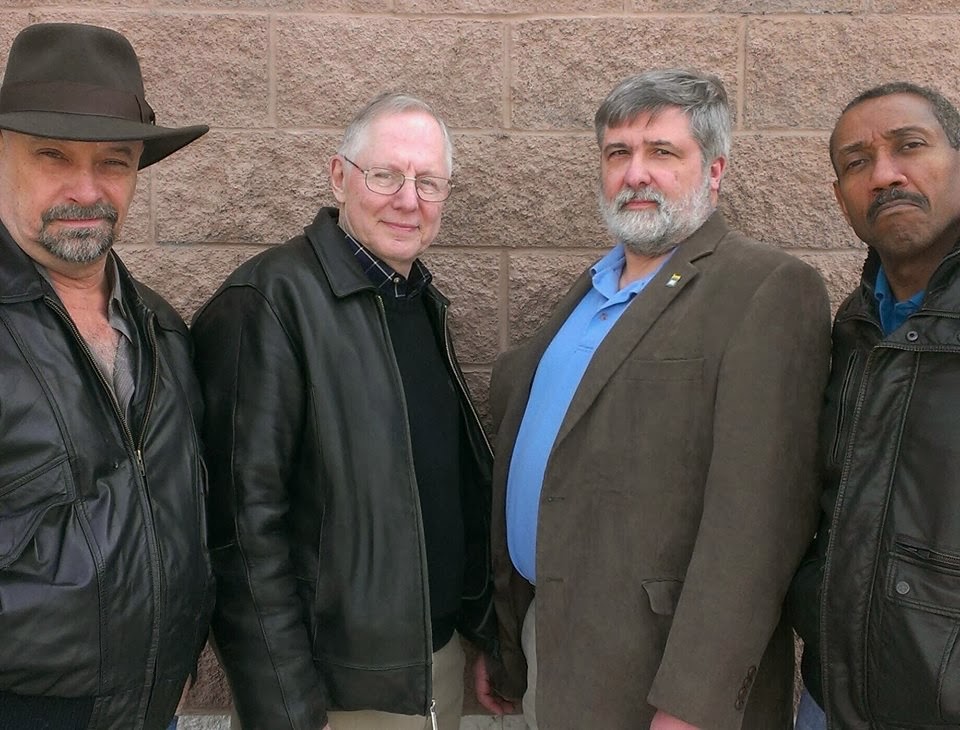 When the email organizing the meet came along, it included suggestions of physical items that lent themselves to the image of the mystery genre; things such as trench coats and Fedoras, leather jackets and switchblades, .38s and blackjacks. I thought it was a great idea, especially since I owned a Fedora and leather jacket, and not a .38 or a switchblade. But the Fedora was too dressy for the jacket, so I settled for my Stetson since it looks much like a Fedora. Yep. That’s me in the pic. Bogie would be proud. Those other good-lookin' writers are Larry Matthews, Dana King, and Austin Camacho.

I have decided to adopt the Stetson and the jacket as unofficial trademarks; something I can use to promote myself, an idea I’m beginning to warm to. One of the Divas is already doing this. She loves her stilettos. And she points them out every chance she gets. That’s self-promotion, although it mystifies me how you gals can walk in those things all day long. Now when I see a pair of 5” heels or hear the name, I think of her. The shoes are her unofficial trademark. Johnny Carson’s golf swing, Charlie Chaplin’s unique walk, The Rifleman’s Winchester … all unofficial trademarks. If you hear someone say, “I’ll be back,” in a heavy Austrian accent, who do you think of? Or, “Excuuuuuse! Meeeeee!” Do you remember who said that? It became his trademark line.Trademarks such as these come along naturally. They just happen. But nothing says you can’t create one to suit your unique persona. So I have decided to use the Stetson and the jacket. And I already know it works.

Last weekend I attended the Bay to Ocean Writer’s Conference on Maryland’s eastern shore  sporting my new trademark look. As I walked between buildings to the next panel, I heard someone behind me say, “I thought I recognized that hat!” It was one of the Myster Write authors. Oddly enough, he has a mystery series in which he equipped his protagonist with a trademark of his own: a pair of wrap-around Oakley sunglasses.

Eulogy for Zeake ... Part of the Family

Writers of mysteries and thrillers employ Death in their work all the time. I am no different. Death always finds its way into my stories in one form or another, but when I write it, I never consider how much pain is involved with Death. That changed today. As a writer, I compose scenarios of Death; I set the stage, position the players, and direct the action.

But that … is fiction.

Yesterday was Saturday. I watched over my son’s dog Zeake for the final day of his life. Zeake was a fourteen-year-old Yellow Lab; Dysplasia had taken his hips, he could barely walk, and his body was shutting down. He would not eat and he threw up any water he drank. I watch him constantly, trying to keep him comfortable, carrying him outside, and cleaning up when he had an accident in the house. We scheduled with the vet for today, Sunday morning, to send Zeake Home where he’ll be able to run and play with his golf balls again. It was the single hardest thing I've ever had to do in my life. Zeake is family, always has been and always will be, and I miss him terribly, as evidenced by the blathering mess I have become at this writing.

As a writer, most of my work mirrors reality. I draw from things that actually happen and mold them to suit my purpose. Without reality, there can be no fiction. But unlike fiction, reality is irreversible, and in matters of death, there is no reincarnate as there can be in fiction. So for today, at least, reality and fiction have nothing in common for me. If a fictional character I have invested in dies, I may feel a twinge of momentary concern at their demise, but as I turn the page, the feeling wanes. I take no stock in it, nor do I place anything higher than entertainment value on that which is unreal, even if of my own creation.

Today, there is no page to turn.

Some writers of romance are deft enough to evoke lasting feelings of anguish in their readers at the death of a character. I cannot. I am not that good. But I do know that for today, and for the near future until Time does its work, I will feel the sting of reality, and the unbearable heartache of losing someone I love dearly.... And I use the word ‘someone,’ intentionally.

I feel for my son, Corey, most. He raised Zeake from a puppy, and taught him a multitude of things.

He taught him to retrieve beer from the fridge, but occasionally, Zeake would put a canine tooth through the can, and happily bring a spraying mess into the living room.

He fetched the golf balls Corey used when practicing his chip shots in the yard. Zeake never chewed them. He had one of his own for that. I remember being there when a neighbor asked if he could rent Zeake for that exact purpose.

Zeake would “speak” upon hand commands, fetch the paper, and one day when I was at Corey’s house, Corey sent him to meet the mail carrier truck. The mail-woman was new and a little afraid of Zeake at first. From the porch, Corey called to her. “Give him the mail!” She reached down and Zeake took it in his Lab’s soft mouth, and trotted it back to Corey.

“Amazing,” the woman said.
I thought so too.

Once Corey said to me, “Watch this.” He told Zeake to fetch his shoes. Happy with tail wagging, Zeake returned with Corey’s shoes. They were different colors, but there was one left shoe, and one right.

Being a Lab, Zeake was a water dog. If he saw water, he made a beeline to it. It was all Corey could do to keep him on shore. I used to take my own lab Murphy to the beach with Corey and Zeake on rare occasion. Zeake would fetch the balls we threw out into the water, until he saw kids. Then he’d swim out to play with them, and forget all about us.

The things he could do are too numerous to mention, but I think the thing that touched me most about that amazing dog, was his love for a small toy he had from when he was a pup; a stuffed red heart that he cherished. Another dog may have torn it to pieces, but Zeake loved it, and took care of it. We looked for that heart before leaving for the vet this morning, but could not find it. It broke my heart.

Zeake was more than a dog. For Corey, and all of us, he was a friend who greeted you at the door with a wagging tail and kisses, a part of the family, same as a brother or sister or mother or father. I know Corey will not be the same after sending Zeake Home, and I tried my best through my own tears and sobs to assure him that this was best for Zeake. I know he believed me, but that didn’t make it any easier.

I related something to him that I recalled reading that rings with undeniable truth. I knew this day would come, so it had a profound effect on me.

THE 10 COMMANDMENTS OF DOG OWNERSHIP

I have taken the liberty of reprinting the last of them here.

9. Take care of me when I get old. For you will grow old, too.
10. When I am old, or when I no longer enjoy good health, please do not make heroic efforts to keep me going. I am not having fun. Just see to it that my trusting life is taken gently. And be with me on that difficult journey when it’s time to say goodbye. Everything is easier for me when you are there. I will leave this earth knowing with my last breath that my fate was always safest in your hands.

And that’s how it happened. As difficult as it was for my son to let him go, he lay with Zeake, petting him and talking to him as the first needle sedated him, and the second….

On my way home, I found myself asking the question; “Why is Death so damn hard?” 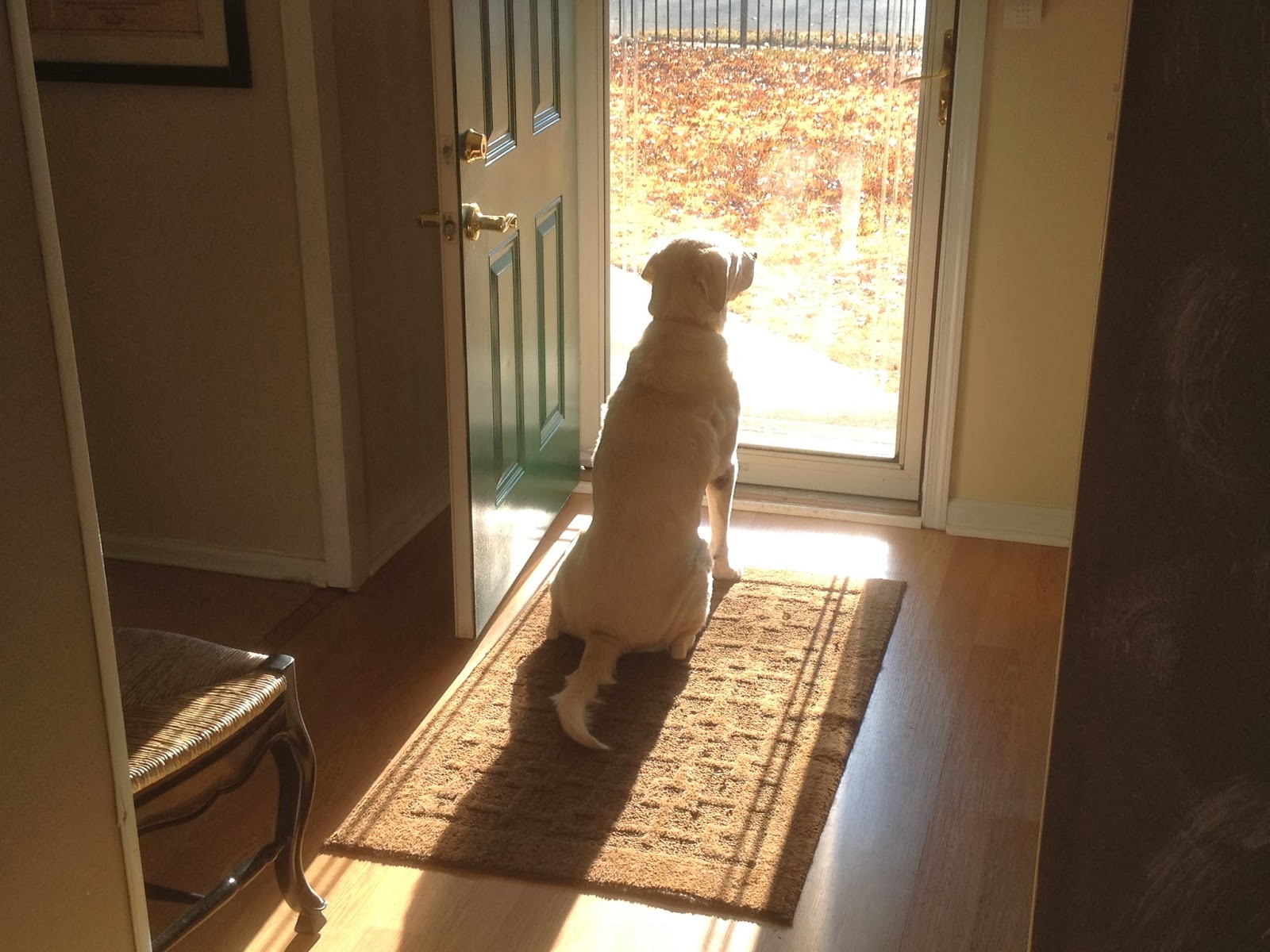 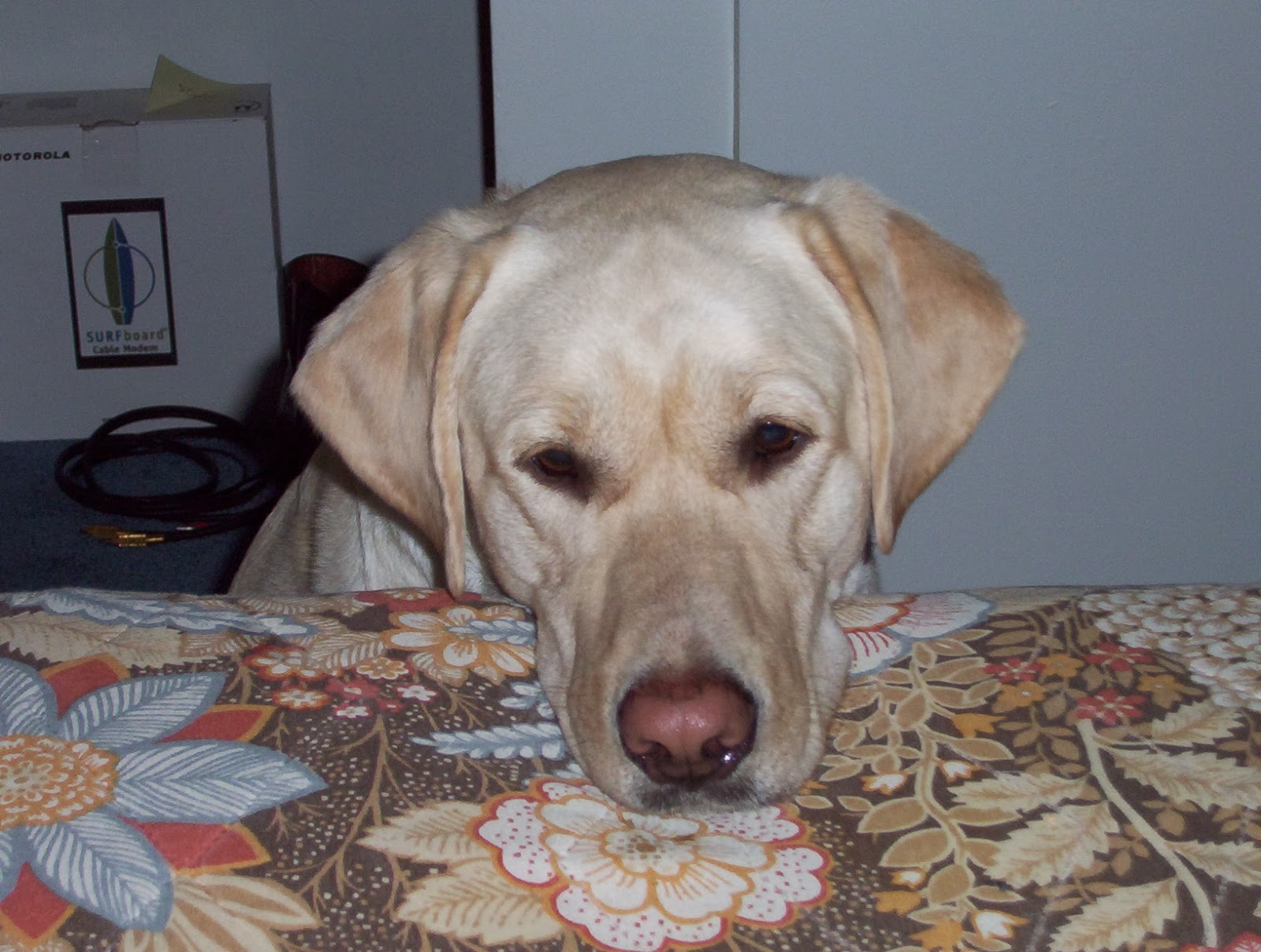 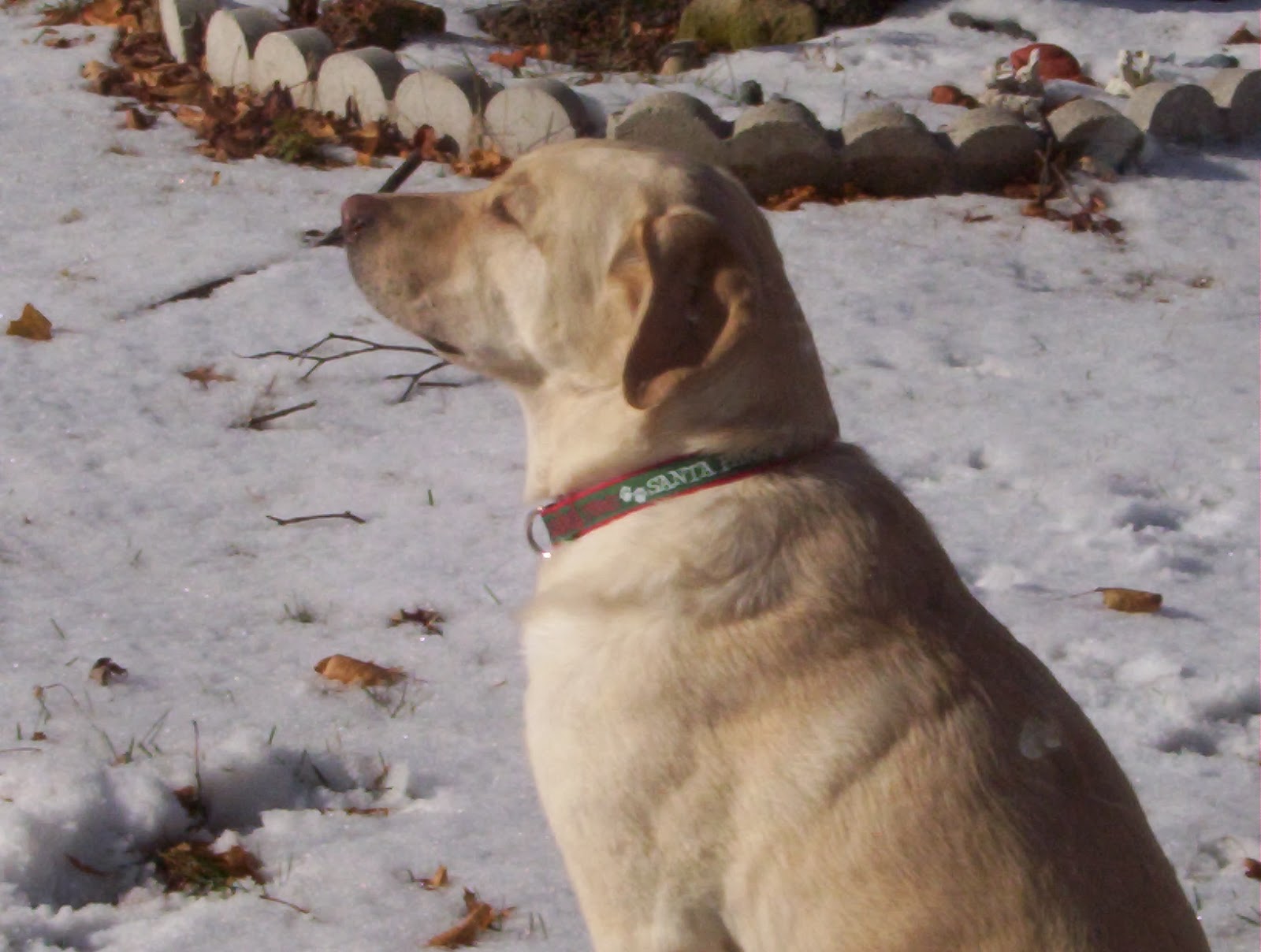 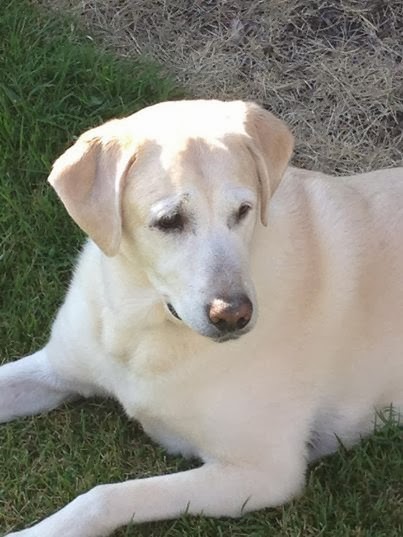