As writers, we each have a favorite genre or two, and maybe one or two comfortable formats we gravitate to. I tend to lean toward Thrillers and Mysteries for the novel and short story formats, and I generally reserve essays for Humor. Now, as far as formats go, I didn't really think about them all that much, but a week or so ago, a friend of mine said:
“Hey! You’re a writer….”
I looked around to see who he was talking to.
“Think you’d like a pirate murder-mystery?”

Turns out he was talking about a dinner play. Now I've been to exactly one play, not counting the ones forced on me in high school. I've never written a play because plays aren't really my thing, but Mark went on to tell me that the play was being put on by the Brewmaster/Owner of The Heavy Seas Brewery here in Baltimore. Mark is a beer aficionado and knows a good beer when he drinks one … or two … or….

Come to find out they were having the play in the Heavy Seas Alehouse downtown on Bank St., a brand new watering hole touting Baltimore’s rich nautical history. The play was themed around—you guessed it—pirates. It sounded like fun, so Maggie and I joined Mark and Debbie for a mid-week night out. 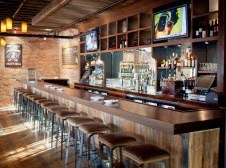 We arrived a little early, so we moseyed up to the bar and caught up on stuff. The interior was immaculate and maintained a Caribbean ambiance with rich dark wood, sturdy furniture, and a metal front door so heavy that it took a fair amount of strength to open. It boasted the brewery’s flagship beverage on tap, and for my money, I found the venue pleasant, fresh, and comfortable.

Debbie and Mark are beta reading my next novel, and we discussed writing and other mundane things over a couple beers as we waited for things to get started. The play, Huge Done It? A Pirate Murder Mystery, was written by Adam Mack, produce by The Murder Mystery Company, and performed by local actors, who just happened to be milling about in costume minutes before we were ushered into the Captain’s Lounge for the play. Little did we suspect that some of us would have roles as well.

According to Maggie, who loves researching just about everything, the actors scrutinize the audience for specific qualities before the show begins to see who they can shanghai to fill out “audience” character roles. No sooner than we were seated, the cast—Capt’n One-Eyed Willie (Steven Foote), Capt’n Long Jane Silver (Jess Rivera (Yes, Jane. This gal was a hoot!)) and Lady Pirate Anne Bonnie (Alexandra Goldstein)—began roaming through the small audience assigning roles to the unsuspecting.

They zeroed in on Mark and me right away, gave us name-tags and hats to identify who we were, and a dossier with everything we'd need to become characters in the play. Mark starred as Captain Kidd (the first murder victim), and I played Doctor A.R., pronounced ARRRRGH! In fact, there was so much ARRRRGH going on that night, I woke up this morning still ARRRRGH-ing and agitating the dogs to no end.

Each character had a bio, and secrets … lots of secrets … and the rule was that if someone asked a question during the investigation of these heinous crimes, we couldn't lie. But we could say nothing … unless bribed with Buccaneer Bucks.

In actuality, the cast, staying in character, functioned more as actor/directors, setting the tone and directing the play where they wanted it to go, keeping it on track while guiding the audience/players. Out of about thirty people, ten were “recruited” for roles and no one declined—it just looked like too much fun.


As I mentioned earlier, each character had a bio and lots of secrets known only to them. Mine, for example, was a fear of touching dead people and “winging it” when it came to Cause of Death. Not a good phobia for a doctor to have. I was a bilge rat, a scallywag, a scoundrel, and the two actresses referred to me as a scurvy dog the whole night. At first, I thought they actually knew me from my single days. Then, somewhere around the main entrée, it dawned on me that each of these roles had rich and complex characteristics and foibles that entwined with each other. Every character was connected to every other character in some manner, and usually not in a good way.

This little play contained all the necessary elements a good story must have: plot, setting, conflict, character flaws, motivation, opportunity, infidelity (implied), betrayal, and all that goes with them. The writer could easily replace last night’s murderer (Blind Hugh, who wasn't blind at all, by the way) and replace him with any other character without a lot of re-writing. Each character was created with reasons to want to kill another character.

So there ye have it, matey! I won’t be gettin’ into the rest of it, other than to say that if ye ever get the chance to see one of these intimate little dinner plays, ye should. Aye, they be good clean wholesome fun for your entire crew, and something most out of the ordinary.

Oh, I totally forgot to mention … I took home the Best Actor award as well.

What Do You Do, When You’re Not Writing?

I don’t get sick very often, but I’m sick today; not so sick that I can’t do stuff, but sick enough to be whiny and to drive my wife crazy. So I climbed from bed, complaining the whole way, and trudged to my office, making Maggie wish she had taken a different day off to prepare for Easter.


I’m not 100%, but I decided to see if my sick brain could learn something. I pulled up a course from Writer’s Digest that I signed up for last week—Creating Engaging Blogs by Dan Blank. I decided to see what he knew that I didn't. I found, it was considerable.


By and large, my blog (this one) isn't bad, but he pointed out little things that could make it better; not so much regarding content, but more along the lines of appearance and function. One of the points that stood out concerned the description of the blog … what it’s about, and who might enjoy it.

Mine had no description. And the more I looked at it, the more I realized I was lucky to have any readers at all … not counting my family of course. I made them read it. So I started changing things; the background, the template, and some of the gadgets. I added a description, and changed a few other things. The cool part about a podcast is the ability to pause it. I’d learned something and compare it to my blog, pause the podcast, and fix stuff. Worked out pretty well.

Another critical point he brought out was the “About Me’ page, or in my case with BlogSpot, my Profile from the Google site; another aspect of a blog that I lacked. He stated that a blog should not be about ME ME ME, but more about how it benefits the reader, and what the reader will gain from it. I write about writing, the writing process, the journey to publication, and occasionally digress to other things—both funny and sad—that I have found interesting, or that have profound effects on me. I like to think my readers enjoy these little diversions as well, but on the whole, I tell my readers of my adventures in the land of writing and publication, and hope they gain a bit of insight.

For example, somewhere in my blog is a post on reading excerpts before a crowd of strangers, and another on the things one might say when asked what their book is about. These are the things aspiring writers aren't concerned with until they come face to face with them, so I point them out in my blog.

If your profile is all about you, that’s fine, as long as you tell the first-time reader how you and your blog can benefit them. Mine was about me, not the blog, so I changed it. I expect I’ll get around to the cool stuff I did later as things progress.

Posted by Unknown at 1:02 PM No comments:

Labels: blog, blogging, db corey blog, What Do You Do, When You’re Not Writing?


I wish I had a nickel for every time someone told me to “write what you know.” I write crime thrillers and mysteries, but I don’t really know them, per se. I was never a cop. So I use my imagination, a little insight, and a bit of inspiration to invent stuff. That’s what fiction is. But when I wrote the sixth chapter of my upcoming novel, I needed a graveyard, a priest, and a church. Simple, right? Many churches have graveyards, and all churches have priests of a sort. So I started with the church. I drew on what I knew. I began to pull in memories of the church I went to as a child.

I grew up Catholic, and went to small church that was little more than the basement of a Catholic school. It was perfect for the book; small, poor, and exactly what I needed. But it didn't have a graveyard. So I created one. I exercised a little Creative License and turned the plat of land they reserved for a new church into a graveyard. Growing up, we knew a proper church would be erected because every Sunday, they held a second collection specifically for its construction. Something else I “knew.” So I wrote the chapter with the church, second collection and all, with the priest and with the graveyard. It all worked out fine.

Last week, I met my brother for a couple beers and a bunch of oysters at a Biker Bar. The oysters were free for just a tip to the guy wielding the oyster knife. It was a good deal. When Maggie and I left, I decided to show her where I grew up. It wasn't far from where we were, and neither was the church. So we drove there as well. Pulling in, I noticed a new building that wasn't there when I was a kid; some sort of assembly hall. But it wasn't a church. In the fifty years I’d been gone, the priests who mentored me in the ways of Christ were long dead, the church was never built, and I was disappointed to find that the land reserved for it now functioned as soccer field.

At the corner of the field is a plaque dedicated to the priest who was the pastor so many years ago. He died a Monsignor. I used all but the plaque in the novel because I “knew” them, and even brought that priest back to life, but  I employed Creative License to create the one thing I really needed to make the scene work.


Until I went there, I had no idea the land had been used for a soccer field instead of a church. And even though I feel a little cheated out of a birthright, I guess the kids like it better that way. And let’s face it—I wouldn't be going to that church at this stage of my life anyway. But after applying a little Creative License, I have to admit—if it can't be a church, then I think I like it better as a graveyard.