Maggie thought I should post this because its a through-provoking Halloween story I wrote a couple years ago.

Let me know if you enjoy it, or if it scares the living shit out of you. 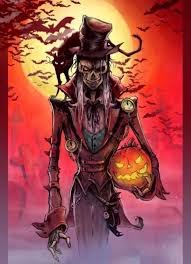 Three hours later, Tony climbed from bed, washed his face, and decided he should have a little more faith in his daughter. He trotted downstairs feeling every bit the overbearing parent Connie thought he was. He walked into the kitchen and looked around, but didn't see his daughter.
“Where is she?” he said to Connie, suppressing a newfound anxiety. “It’s ten-thirty….”
“Oh, I’m sure she’s at Jen’s rooting through all their goodies. She should be home soon.”
Now Tony felt overbearing had its place. “Call her cell and tell her to get her ass home. She’s in big trouble.”
“Jesus, Tony.…”
Connie huffed a bit more, but this time, Tony didn’t budge. She picked up the wall phone in the kitchen and dialed a number. A few seconds later she hung up and dialed again.”
“What’s wrong?”
“It’s going directly to her voicemail. I told her not to turn off her—”
“Call Jennifer’s house.”
Connie, now teetering on the edge of panic, offered no argument. She dialed a new number.
“Hi, Sandy. This is Connie. Is Heather still there?”
… A long pause.
“No, she’s not here. I… No. What time? Nine fifteen? And Heather wasn’t with her? Oh my God! No, no, Sandy. That’s. … No. Look, I’m sorry, I have to go.”
As Tony listened to his wife’s conversation with Jennifer’s mother, every muscle in his body tensed as if the weight of the world had just descended upon him. Connie hung up the phone, her face ashen. She looked up at Tony—the sudden fear in her eyes unmistakable. With her heart in her throat, she managed to force out the words.
“I think we better call the police.”

Two uniformed officers spent an hour questioning Tony and Connie as to Heather’s description, her dress, her plans, and her state of mind when she left. The officers glanced at one another when they found Tony and his daughter had argued before she left the house. Finishing their interview with Heather's folks, the two officers made a beeline to Jennifer’s house, and her parents.
They arrived to find a hysterical teenager, sitting on a kitchen chair in the middle of the living room, being interrogated by anxious red-faced parents on the edge. It was a scene right out of a noir novel. All that was missing was a glaring overhead bulb. The cops separated Jennifer from her worked-up parents, calming the scene. Then they took Jennifer aside.
“Tell us what happened, Miss.”
Jennifer settled herself enough to talk to the officers, now that her parents had deferred to the two cops. “She made me promise not to tell. She was mad at her father. She told me she would be home in time. We met these guys.…”
“What guys?” her father bellowed.
“Please, Mr. Browning. Let us ask the questions, sir. Jennifer. Tell us about the guys you met.”
Jennifer bit a quivering lower lip. “We had just left my house … ten minutes, maybe. A car pulled up next to us and these guys asked us if we wanted to go to a party. Heather wanted to go, but I told her I didn’t think it was a good idea, but she said she was going with or without me and her father couldn’t tell her what to do anymore. I didn’t think she would really go without me, but she got in the car and they pulled off.”
Jennifer fell into hysterics as she continued to detail as much as she could remember about the guys and the car. When the cops got all they were going to get from her, they went back to Heather’s house to talk to her parents.

“Apparently, Mr. DeNelli, Heather accepted an invitation from several young men to go to a party. She wanted Jennifer to go, but Jennifer knew her father wouldn’t approve. So, Heather went by herself. Jennifer said Heather was angry with you. Did something happen here that we need to know about?”
Two hours later, after Tony filled them in, the police left. Night turned into day. The police began combing the surrounding area at dawn, waiting only that long to begin the search in the expectation that the angry teenager would show up at home by then. Day turned to night, and back into day with no results. Several days passed before a knock came at the door.
“Mr. and Mrs. DeNelli, I am Detective Burns. May I have a minute of your time?”
At the urging of the distressed parents, Burns stepped into the house and showed them a picture of a nearly naked young blonde woman, found just after sunup that morning. Her skimpy costume dress was gathered around her waist and her top lay in shreds beside her body. She had been raped and beaten beyond recognition, and dried blood ran down her neck from where her throat had been slit.
“I was hoping that you might be able to help us out. This costume…. Can you tell me if this is what your daughter wore that evening?”
Tony’s eyes devoured the photo. “No,” he said, denial weighing heavy in his answer. “She was wearing sweats. Not a costume like that. I would never let her go out wearing something like that.”
"We found sweat pants and a sweatshirt nearby."
Pain registered on Tony’s face as his heart leapt into his throat. He looked again, and recognized the costume he made Heather change out of. And as he conceded the similarity of this woman to his daughter, horror took him. He pulled the color 8 x 10 photo against his chest and began to sob.
“Couldn’t you at least have covered her up with something?” Tony cried. “Allowed her some dignity?”
Detective Burns began to laugh, and enormous teeth lined a half-moon grin that distorted his face like a funhouse clown.
“Dignity? The way she’s dressed? Dignity? She looks like a whore! Just like you said she did! She got what she was asking for, and it’s your fault!”
The cop began to shake Tony with all his strength, as if to shake some sense into him. “What kind of father are you?” He screamed, launching spittle from his mouth in flyaway strings. “What kind of father are you…. What kind of father—”
Then from somewhere distant, Connie’s voice floated in, layered atop the chaos.
“Honey? Honey? Are you okay?” she called, shaking her husband, trying to wake him.
Tony bolted upright, wide-eyed as his wife shook him. The sheets were soaked with his sweat and he was trembling. Dazed, he looked around, uncertain of where he was or what was happening.
“Tony? You all right, honey?”
“I … I ain’t sure.”
“You were having night terrors … calling out. And you were crying.”
Tony wiped the tears from his face and swung his legs out of bed. Stumbling into the bathroom, he drenched his face in cold water. Then, he stared at the mirror and saw a terrified man. Slowly he began to realize it had all been a dream. He walked back into the bedroom and told his wife what little he could remember of his fading nightmare.
“It was about Heather. Something … bad happened.”
"Honey, she's fine. She's in her room. Go see for yourself."
Tony peeked into Heather’s room to see his only daughter sound asleep, her teddy bear curled up tight in her arms.
He began to weep.

“Heather’s going out with Jennifer tonight, Tony.”
“I don’t want her out too late.”
“She’ll be home on time. She’s a good kid.” Connie grinned at her husband. “Much better than you were at her age.”
At that moment, Heather popped into the kitchen. “I’m ready. I’m heading over to Jen’s.”
Tony took one look.
“You ain’t goin’ out dressed like that.”
“But Daddy…”
“No ‘buts’.”
“Mom?”
“Tony, it’s just a costume.”
“She looks like a slut Connie and I ain’t lettin’ her go out like that.”
“But Daddy, all my friends…”
“I don’t care what your friends do. Now, if you wanna to go trick or treatin’, change into something more presentable for a fourteen year-old girl or you can’t go. You ain’t leavin’ this house lookin’ like that.”
Heather stormed out making all the disgruntled noises that teenage girls make when they can’t get their way. She returned a few minutes later in gray sweats.
“Well?” Heather said as she reentered the kitchen. “Is this okay?”
“That’s much better. Be home by nine-thirty.”
“Nine-thirty? But everybody else…”
Something twisted Tony’s stomach, wringing it out like an old dishtowel, and foreboding cut him to his core. He looked at his wife, and the terror she saw in her husband’s eyes frightened her.


“On second thought,” he whispered, “I think I’m going with her.”