Last Saturday, I seized on an opportunity and took Maggie to the set of Thurston—The Western Web Series. My buddy and fellow author, Kathryn O’Sullivan invited me (at my request) to come and see the goings-on as they wrapped production of Season Three. Kathryn partners with her husband Paul to co-produce the series, and both wear many hats, including creator, writer, producer, director, cinematography, video editing, and wardrobe design for the series. If you think that sounds like a lot of work, well pardner, I reckon you’re right. 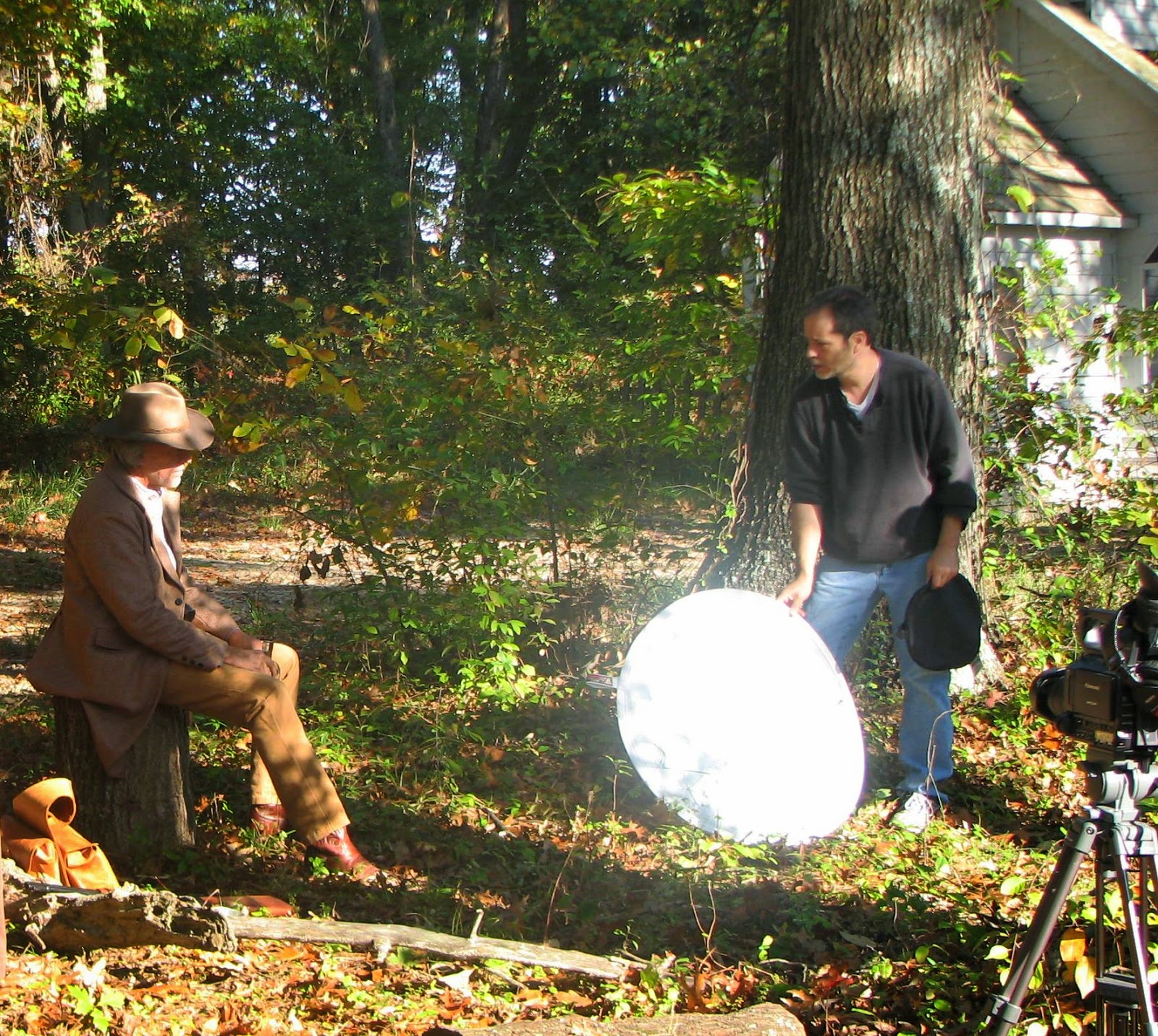 The location is super-secret and hard to find, and only about an hour from where I live, but by the time Maggie & I arrived, shooting had already begun. We walked down a narrow road that was really more of a horse path used by motor vehicles, past the outdoor set of a western town. The fronts of a general store, blacksmith shop, livery stable, and saloon (what self-respecting frontier town would be without a saloon?) sat inactive on my left as we made our way back. Kathryn met us halfway smiling and shushing since shooting was underway. I introduced her to Maggie and we followed her to where the action was, tip-toeing through the autumn leaves, looking for bare spots on the ground to avoid making noise.

It was fun already. 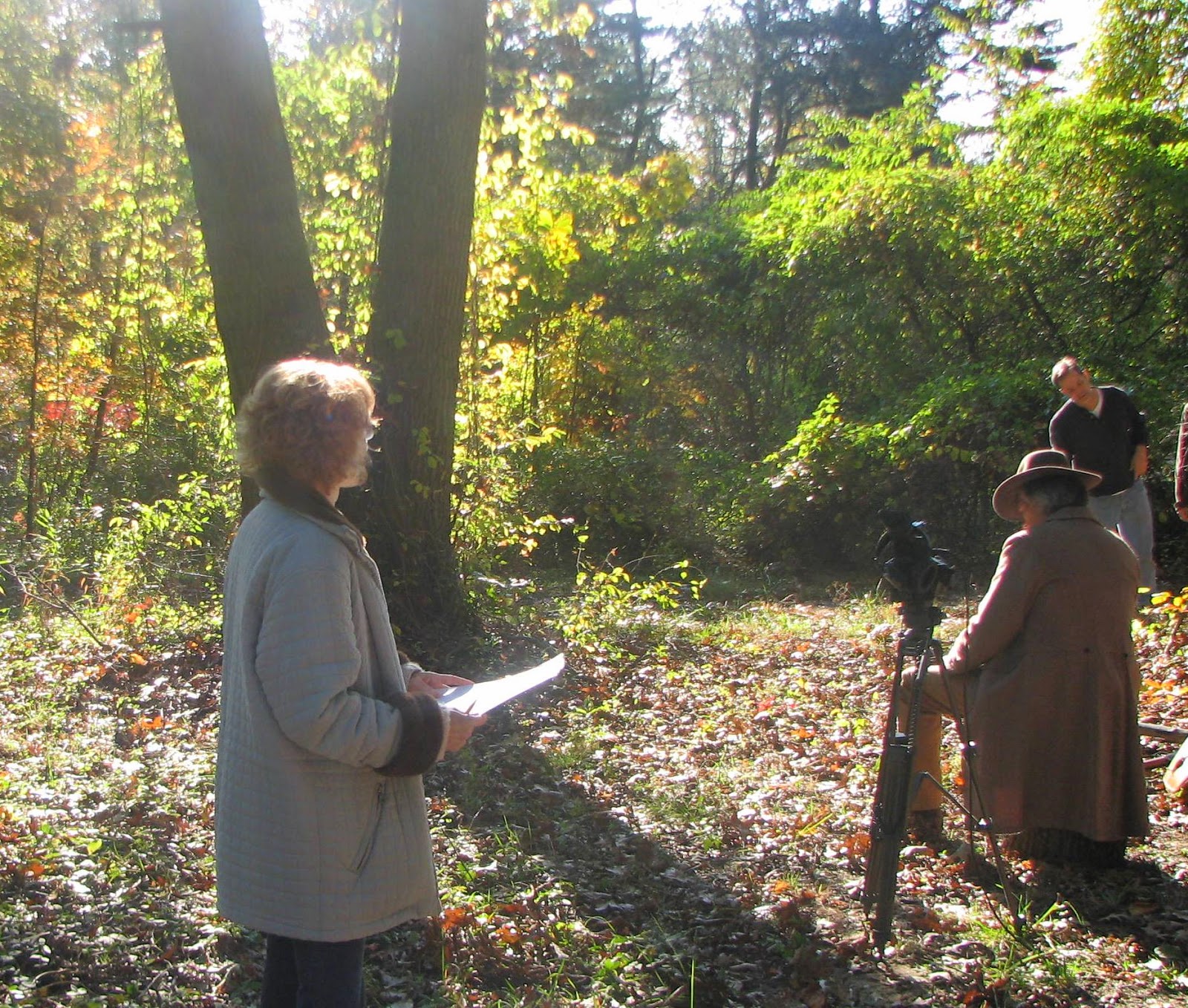 When the director called “Cut,” the scene ended, and Kathryn graciously introduced us to some of the cast and crew that weren’t too busy and we chatted a bit. For me, it was sort of like brainstorming scenes for a novel, talking to the characters and running through scenarios, and imagining possible turns of events. But here, it was real. The scene played out in the flesh, so to speak, with the director placing the actors and setting up the action, and Kathryn following along in the script.

The production was compact and economical, and on this day, just a single camera was needed. This necessitated multiple runs of the three scenes on the shooting schedule to be shot from different camera angles. I heard the term MOS several times, and discovered it meant filming without sound. I couldn’t tell when they were and when they weren’t, so I whispered most of the time, and didn’t let Maggie talk at all … which was the real upside of the day for me. 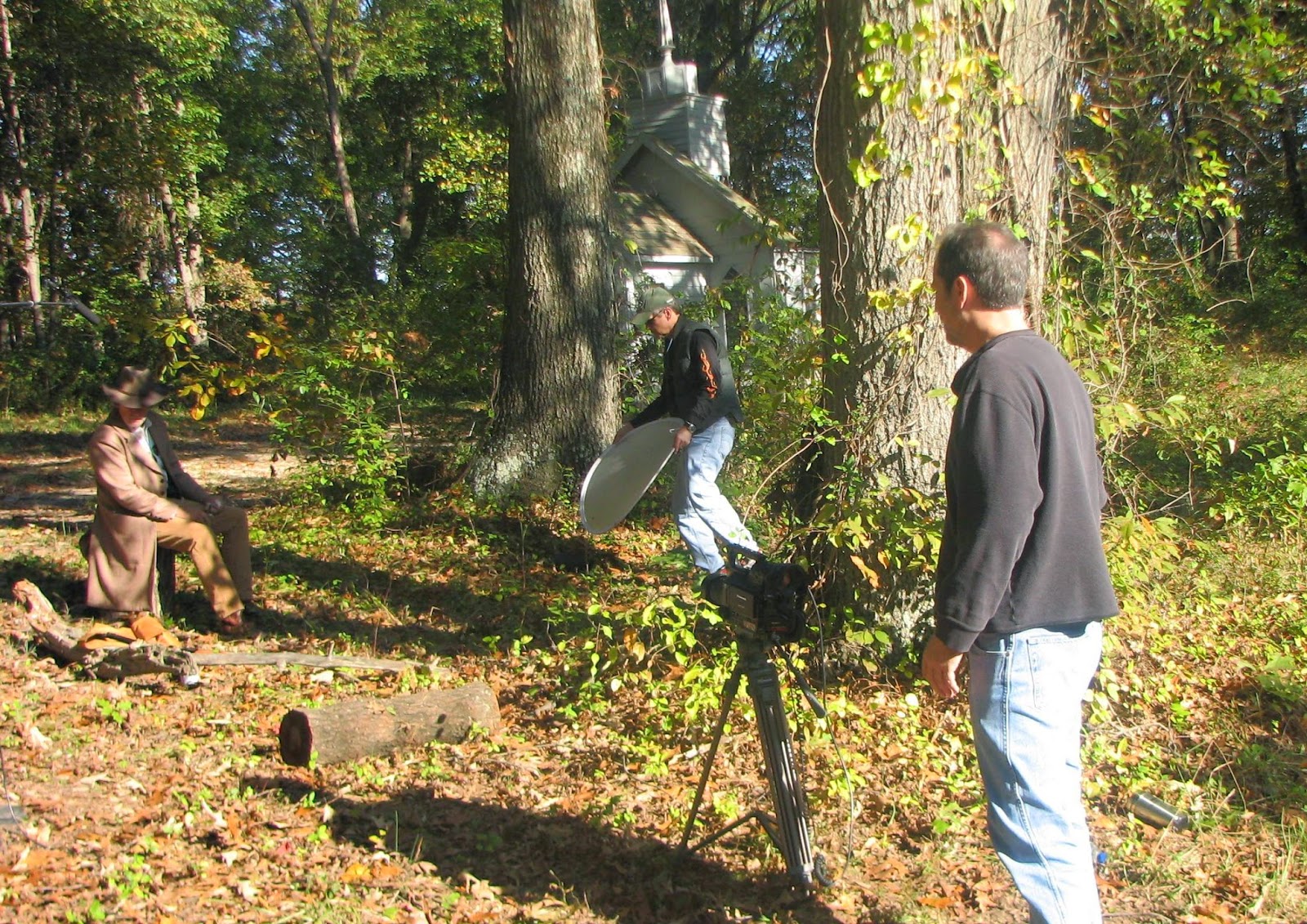 Only kidding,
Honey. Sound was a bit of a problem, though, and not just the inadvertent shuffling of feet or snapping of a twig or ring of a cell phone. Being deep in the woods, who knew locomotive whistles would pass by or jet airliners would roar overhead just as an actor delivered his line. Many a head dipped in frustration and shook side-to-side that morning I’ll tell ya. 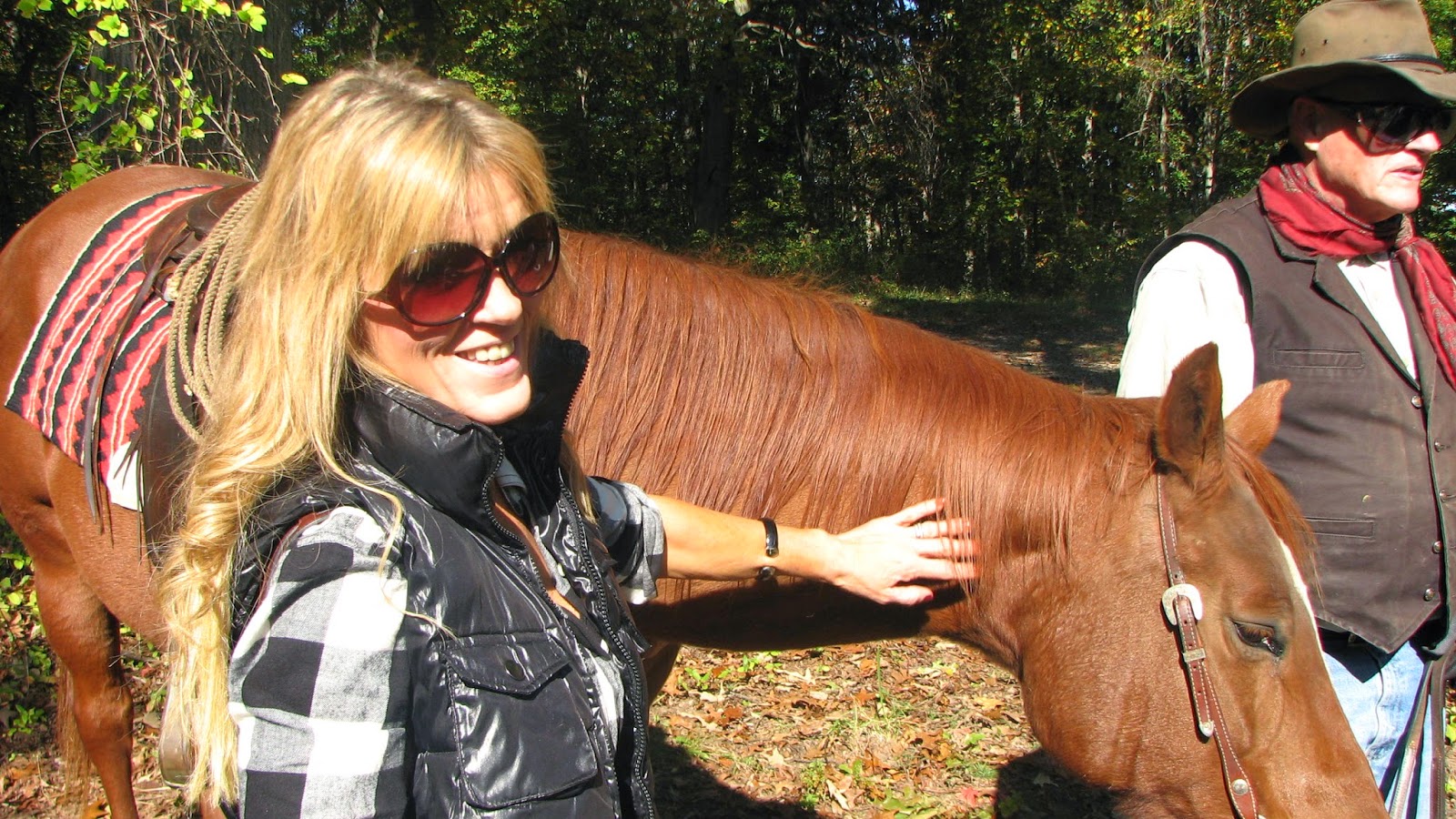 Once the various camera angles for the first scene were “a wrap,” excuse my amateurish use of movie parlance, and they were about to begin with the next scene, the wranglers brought in
.... the horses.

As if this day couldn’t get any cooler! 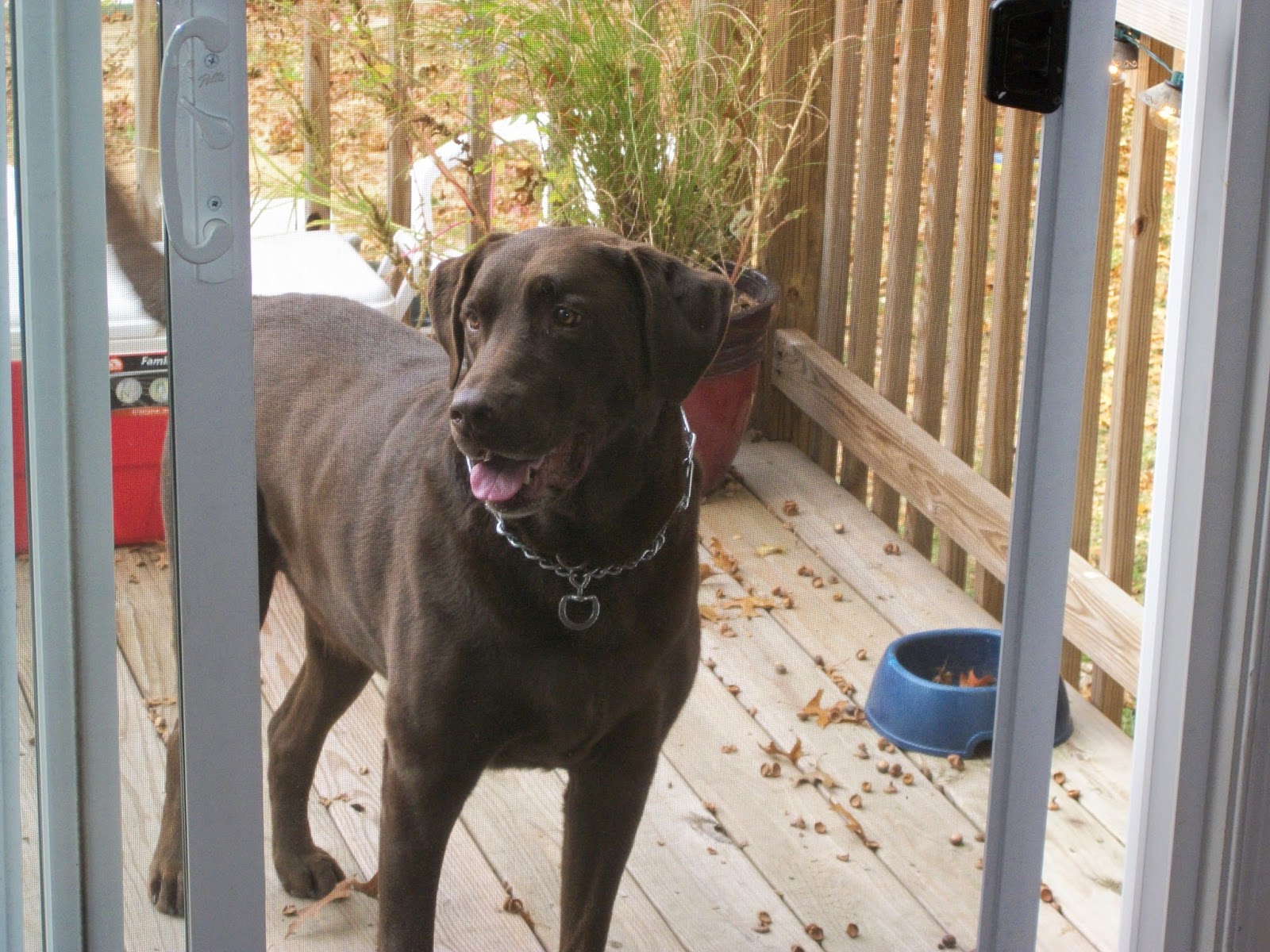 Maggie wanted to take one home. But we already have Murphy, who is almost the same size. Suffice it to say we had a wonderful time, and I’m sorry that I can’t talk more about our terrific experience on the set without injecting spoilers, which I promised Kathryn I would take care not to do. But I will say this, it was a real event for me, and I enjoyed it immensely. I found that running scenes for a novel is much like directing the actors and the action on a set, except that it’s all in my head, and I am the director.

Not that I’m looking for a career change, mind you, but to be totally honest, I think I’d like to try directing sometime. I can see the lure and the fascination of interpreting someone else’s creation, and I think I understand why so many actors become directors at some point in their career. Besides being rewarding, it just seems like a whole lot of fun.

Catch the first two seasons of Thurston—The Western Web Series at your first opportunity. Season Three is just around the corner, and you don’t want to miss it.